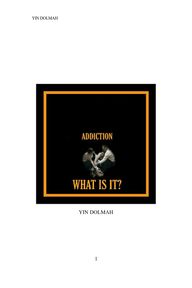 YIN DOLMAH 2 ADDICTION When I was a young boy, I saw many people fall into all kinds of addictions in the small town where I grew up. The pressures of life caused many to revert to alcohol, drugs and other substances which ultimately destroyed them. One day, while sitting under a Neem tree with an old neighbor who was revered greatly in our village for his wisdom and insight into many things, one of our village men who had gone mad from smoking the wrong herbs wandered by half naked. The sight of the mad village man prompted me to ask my old neighbor what his thoughts were on addiction. The Oldman retorted, “You ask me about addiction and why people fall into it? My question to you Yin is, what is addiction? Does it only refer to narcotics, gambling, drinking and the well-known vices?” I replied, “I would think so.” I have only heard of addiction associated with such acts. The old man went on; “there lies the error many have made regarding this matter. This terrible scourge known as addiction has been so narrowly defined by many authorities the world over. The unfortunate perpetuation of this narrow definition of what it means to be an addict has wreaked great havoc and chaos in many people. Listen to the words I am about to utter very carefully so you may achieve good understanding regarding that which you ask. In so doing I hope you may fully guard yourself from falling prey to its multitude entrapments.”

YIN DOLMAH 3 Addiction, the old man continued, is anything that makes you willing to trade your dignity and respect in exchange for much lesser value and for which your mental judgement has been rendered powerless or weakened enough to prevent or stop the exchange due to the control and hold of that thing to which you are have become powerless. Yin, life is a series of exchanges. You exchange your time and attention in the classroom to gain knowledge You exchange your time, effort and expertise at work to gain a paycheck, you exchange your money which you give to the beggar at the street corner for a sense of service and satisfaction of helping those less fortunate than yourself. An act I refer to as a labor of love. Every one of these exchanges should be commensurate when you compare what you give to what you gain. Worthwhile, not just in terms of monetary value, but the total worth of the exchange. If it happens to be an exchange that does no more than bring you pleasure, be very careful not to exchange more important things in life in order to achieve that pleasure. An incommensurate exchange will breed inevitable chaos. Three things immediately come to mind.

YIN DOLMAH 4 Do not sacrifice your health, family or wealth in pursuit of any kind of pleasure. The moment you begin to sacrifice one of these in pursuit of anything within this world, you have fallen into addiction, Yin. Let me tell you the story of Ruga, who was once my best friend and possibly the most naturally talented and intellectually gifted person to walk the streets of Aglob. Ruga had a rare kind of intelligence; he had the ability to observe the most complicated technical process only once and be able to not only recreate the process but improve it. He read very little yet amassed so much knowledge from so many disciplines he was the envy of all who aspired for higher scholarly achievements. Ruga enjoyed the simple life. With his deep knowledge of many disciplines, he could have easily carved a life of great wealth and abundance for himself. That did not appear to be his desire in life. He was content eking out a meagre existence at the civil service office of the colonial establishment. Ruga from all accounts was a regular man with no substance abuse issues. He hardly drank any alcohol, did not smoke and definitely stayed away from drugs. Ruga was married to an industrious woman he had known since he was a young man in elementary school and with whom he had 3 sons. By all indications, Ruga loved his three boys and wanted to see them do well for themselves. There was a situation regarding Ruga that many would not ascribe to addiction. He had a weakness for women.

YIN DOLMAH 5 Not just the type of beautiful women that would make the most disciplined man develop neck pains trying to keep their heads from turning to take a second look. In Ruga’s case, about anything that had the double x chromosome was a candidate for his attention. Ruga was paid monthly by the civil service office where he worked as a surveyor. He would take his monthly paycheck which was barely enough to take care of the basic necessities of his home when combined with the little money his wife made from selling produce in the market and literally give it all to any woman that was lucky to cross his path. Ruga was so motivated in this life of wealth redistribution he did not think twice about going hungry and starving himself in order to have money to give away to the women he so strongly desired. His sons on occasion had to beg neighbors for basic amenities which could have been easily available to them if Ruga their father, was not on a mission to eradicate the financial problems of the world’s women. The situation with Ruga, his money, and women reached levels that made him a laughingstock amongst those who knew him in Aglob. He lost dignity even though he was not on substance abuse. His sons lost a great deal of respect for him due to his readiness to give away to strange women, bread he did not have to provide his own family. His long-suffering wife could not bear to look him in the eye due to anger and aguish culminating from deep disappointment from a man she erroneously thought many years ago was so intelligent and was going to be her bedrock when she married him.

YIN DOLMAH 6 Ruga not only gave away his own money, but he would try to get money from his wife to give away as well. In the same city of Aglob lived a man by the name of Tebo. Tebo consumed more local wine than anyone you ever met or might ever meet. Good luck ever finding Tebo without a cup of local wine sitting comfortably next to him. At first glance, it appears Tebo is a hopeless drunk in need of immediate help. What if I told you Tebo was the most respected man in Aglob? What if I told you Tebo was the healthiest, strongest and oldest man living in Aglob? What if I told you no one has ever seen Tebo drunk and out of control? Tebo was so much in control of his affairs from a financial and social responsibility consideration standpoint that people all over Aglob thronged to him for advice and to learn from him things no one else in Aglob could teach them. Yes, everyone in Aglob was familiar with his insatiable love for local wine but that was not the narrative regarding Tebo. His extreme love for alcohol was a footnote in any discussions of which he was the subject. His substantial achievements in Aglob and the great deal of respect everyone in the city had for him was the narrative surrounding Tebo. Anyone else living the way Tebo did might have died of liver cirrhosis decades ago or they may have become so consumed by alcohol they might not be in the position to function in a capacity that would earn them

YIN DOLMAH 7 a modicum of respect from those they knew and associated with regularly. Yet Tebo lived the way he did and still was the healthiest old man in Aglob; fit and fully in control of all his affairs. There was not a single negative aspect or attribute of Tebo that anyone could point to and ascribe to his consumption of alcohol. None that I am aware of. Absolutely nothing. Was he an alien who metabolized alcohol differently from us earthlings? Some people in Aglob began to speculate that was the case. How could he live like this for over sixty years and still bear no scars or signs of what, by all accounts, could easily be looked at as an unhealthy, dangerous lifestyle? So, my question to you Yin is, which of the two men of Aglob; Tebo or Ruga would you refer to as having an addiction? “Definitely Ruga,” I answered. “Ruga was willing to lose his dignity and was at risk of even losing his family over his impulsive pursuit of women with no regard to how it affected the things of substance around him. He lost his mind running after all the women in Aglob so much so that he lost complete respect not only from the women who only wanted the money he gave them, but also the people who got to know him closely and observed how he had no sense of what constituted a fair exchange. Tebo on the other hand had what I would call an excessive habit or vice but which in no way got in his way of accomplishing that which he needed to achieve as a man.” “Well thought out analysis,” the old man replied to me. There are many souls who walk this earth who are deeply addicted to one thing or another without even knowing it. On the surface, they look normal like everyone else; they are not hooked on any kind of substance that

YIN DOLMAH 8 would readily expose them as addicts, but beneath the veneer, they have an insatiable desire for something which others may not be aware of. That something might become so strong that it pulls these people to the point of making decisions that adversely impact the most important things in their lives. Things which must and should never be sacrificed. Yin, If you ever find yourself so drawn to something; if you find yourself itching to do something stupid to the point where you lose one or two or three of the things I am about to tell you, you are an addict. The three things are: 1. Money 2. Family and loved ones. 3. Dignity and sense of pride In short, if you are willing or powerless to stop the loss of money, family and or dignity for anything in this universe, you are addicted to that which is causing you to lose these things. When the old man finished talking to me, my perspective on addiction changed forever. I hope the simple three step measure of addiction my old neighbor gave me will be applied to examine our own lives and help identify any hidden addictions which need to be broken in order for to more fully live a life of dignity and respect.