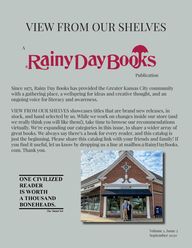 View From Our Shelves, September 2020

VIEW FROM OUR SHELVES A Publication